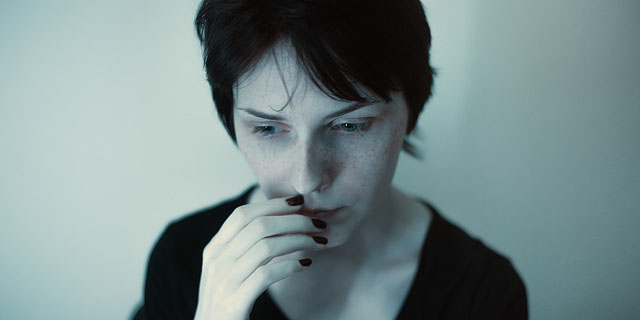 If you’ve had a panic attack, you know how horrible they can be.

Your chest constricts and you can’t breathe.

Your body hunches against the overwhelming weight of the world.

Panic attacks aren’t always avoidable, so when you do have one, you need to know how to handle it.

Keep reading to discover a two tricks you can use to interrupt a panic attack.

A panic attack is a particularly devilish bit of hormonal alchemy. First, your mind drops into a mode of fearfulness, sometimes without any good reason.

Next, your body reacts to that fear with a rush of adrenaline. (It may not feel good, but your body is actually trying to protect you from a perceived threat!)

This is called a positive feedback loop, and this is why panic attacks are so insidious.

Most of the time, when a body system encounters an unhealthy stimulus, it reacts up to a certain level of intensity and then stops, sensing a boundary it shouldn’t cross.

When a person develops a fever, for example, their temperature usually only rises a few degrees – enough to fight the disease but not enough to harm the body.

If a fever happened the same way a panic attack does, the body would keep getting hotter and hotter until it burst into flames.

With panic attacks, the body just keeps getting more and more worked up, and you keep feeling worse and worse.

In the problem lies the solution. To stop a panic attack in its tracks, you have to interrupt the positive feedback loop.

Here are a couple tricks you can use hit the breaks on a panic attack before it spirals out of control:

1. Distraction – Breathing exercises are great for focusing the mind and body on something other than the impending attack (which actually helps the attack abate).

Having a task like this breathing exercise will allow your mind to exit the feedback loop and effectively break the cycle.

2. Logic – Understanding a panic attack can be very helpful. First of all, it’s good to know that despite how terrible a panic attack feels, the body is actually trying to protect itself. You won’t die from a panic attack, even if it might feel that way.

Second, being aware of the positive feedback loop allows you to focus on how you’re currently feeling, rather than your fear that you’ll keep feeling worse and worse.

Next time you have an attack, say to yourself: “Okay. I’m having a panic attack. I’m going to take deep breaths and interrupt the cycle. I’m going to allow this attack to fade away while I focus on my breathing. I’m going to sit with the pain until it melts away. It will be over soon.”

What happens when you have a panic attack? Have you found anything that helps?